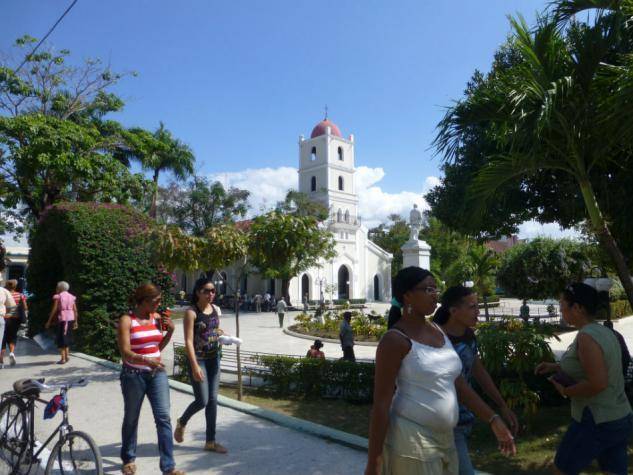 The Cuban High East is a touristic region identified, among other values, by the international song Guantanamera, composed by Cuban Joseíto Fernández. This is a predominantly mountainous region of deep contrasts, and the only place in the country where you can find semidesert landscapes. Guantánamo has a large pocket bay, where the illegal U.S. Naval Base stands, and another smaller bay along which the first village was founded in Cuba, with great natural endemism of historical and cultural wealth. In its territory there are three sites recognized as World Heritage: Alejandro de Humboldt National Park, the centre of the Biosphere Reserve Cuchillas del Toa, and the French Coffee Plantations. Guantanamo means “land between rivers”, in aborigine tongue. Guantánamo's architecture and culture is unlike the rest of Cuba. This city was founded in 1797 and reaches its peak of development from the influence of French immigrants from Haiti. The province is only 80 km away from Haiti its closest point, across the Windward Passage and close enough to see lights on Haiti on a clear night. Guantánamo also has a high number of immigrants from Jamaica, meaning that many buildings are comparable to those of the French Quarter of New Orleans in the U.S. state of Louisiana. The Nipe-Sagua-Baracoa mountains dominate the province, dividing both climate and landscape. The northern coast, battered by prevailing winds, is the wettest part of the country, while the south, sheltered and dry, is the hottest. The north is characterized by rainforests, while the south is arid and has much cacti. Its authenticity lies in its typical products based on cocoa and coconut, its legendary rivers and the preservation of its traditions and indigenous dances, among which stands out the Nengón and the Kiribá. The land of lasting authenticity stands out for its cultural diversity, developed from the most diverse popular expressions in events like the Feast to the Guantanamera, Feast of Waters and the Changüí Festival. It has facilities for the enjoyment of ecotourism, excursions, as well as the discovery of its welcoming people.