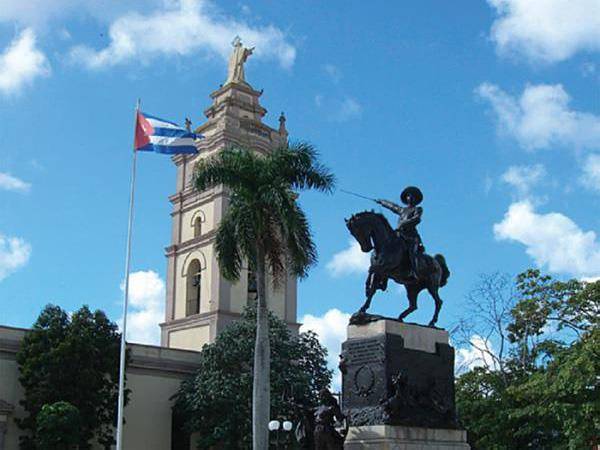 The panorama of Camaguey province is uniformly flat. Vast plains and abundant palm trees characterize the countryside scenery. Two clusters of low mountains stand out in the flat landscape: Sierra de Cubitas, to the North, is remarkable for its canyons cutting it deeply and transversely as well as for the presence of a great amount of archeologically relevant caves; Sierra de Najasa, to the South, features fossil wood remnants, a dazzling natural marvel. Right in the very centre is the capital city, full of magnificent bell towers and elegant old buildings that were once the core of the village Santa María del Puerto del Principe. Camagüey has a very particular urban construction style with narrow and tortuous streets that always end in squares and plazas, where we can still see buildings of outstanding historical, social and architectural value. Camagüey is also known as the City of Tinajones, due to the widespread use of those large recipients of water made of cooked clay. It was one of the most important cities in the colonial period, nowadays it has a wealth of fine baroque churches and some picturesque nooks and crannies, such as the restored Plaza San Juan de Dios. The city itself is one of the prettiest in Cuba, full of architectural gems testifying to its colonial past. Sightseeing in the city will inevitably bring you to a closer appreciation of the life of the city's hero, Ignacio Agramonte, as there is both a park and a museum dedicated to his memory. As well as the houses where other important personalities were born; like the poet Nicolás Guillén; the renowned scientist Carlos J. Finlay; and poets Gertrudis Gómez de Avellaneda and Aurelia Castillo. Crystalline waters and fine golden sand distinguish the beaches of Camagüey. Near a hundred kilometers of beaches of an exceptional quality located at Santa Lucía Beach and a group of surrounding keys, is the main and most renowned tourism attraction of the province of Camagüey. Sabana-Camagüey is the northern-shore group of keys, a transit and nesting place for numerous species of migratory birds and the greatest pink flamingo natural reserve in the Western Hemisphere. Cayo Romano, particularly, was the landscape chosen by Ernest Hemingway to look for Nazi submarines during the Second World War as well as to go hunting and fishing. To the South, the Jardines de la Reina keys are exotic and have wild natural scenery, with abundant coral reef biodiversity and sandy beaches. Despite all these tourist highlights, the best thing visitors find on their journey is the people from Camagüey: gentle, proud, educated and very attached to their land and traditions. Getting to know Camagüey and its people is a unique experience worth trying.