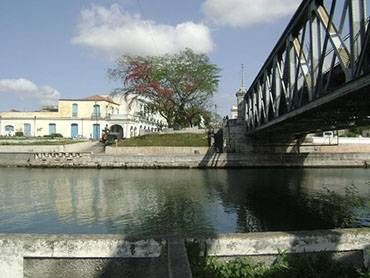 This province is one of the most popular areas for visiting tourists, largely because of its varied topography and natural beauty. The north of the province is marked by rolling hills and the beach resort of Varadero, the south is home to a large area of swamp land and the beach of Girón, better known as the Bay of Pigs. Matanzas often called "the Athens of Cuba" and famous for its many bridges, interesting architecture and music. The city of Matanzas is a land of poets also known for its many bridges that enrich the urban area. Right there, next to a wonderful bay, a popular Cuban rhythm was also born: Danzón. Matanzas is also a good place in which to hear a danzonete or rumba. A city on the sea, it has drawn on the rhythm of the waves, the vigor of its morning breeze and the stately calm of its rivers in creating its culture. Matanzas is probably the one with the highest number and the greater density of tourism attractions, among which, the beach resort of Varadero is the most well-known and demanded in the international market. The caves of Bellamar, with almost 2 kilometers of spaces; the ruins of the Triunvirato sugar mill; and the fascinating Canimar River, of navigable and quiet waters whose limits are marked by an exuberant vegetation, compliment the charms of the city of Matanzas, close to which on the way to the city of Havana the vast Yumuri Valley will make a stop and enjoy the privileged Bacunayagua lookout.