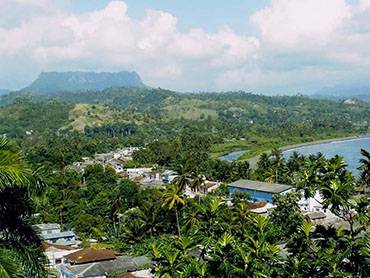 Baracoa City is situated on a bay close to the eastern tip of the island of Cuba where the Caribbean Sea meets the Atlantic Ocean. Baracoa was the first villa founded by Diego Velazquez in 1512. Its name has an Araucan origin and it means existence of sea. Its church preserves the Cruz de la Parra (Cross from La Parra), the first Christian symbol found in the island. The fact that this was an important Spanish outpost is evidenced by the three impressive forts: Fuerte Matachin, now housing the municipal museum; Fuerte de la Punta, now refitted with a restaurant; and El Castillo de Seboruco, which is now a pleasant hotel. This paradise -city, unique in the island, is discernible by the Yunque, a meseta that can be seen from several points. Baracoa has Cuba's biggest rivers, mystical jungle mountains, biodiverse tropical wildlife, hillside plantations of coffee & chocolate (cacao), secluded beaches, coral reefs, the longest history, ancient traditions, vibrant culture and general spellbinding charisma. Alejandro de Humboldt National Park (in the Cuchillas del Toa Preserve of the Biosphere); Alemanes Pass, the Yumuri River Valley, Boma and Mata Bays and the view from the natural terraces in La Maquina Municipality offer you scenery that will make your vacation truly memorable. In this scenery, three of the four palm tree species existing in Cuba can be observed, and treasures the principal and greatest reserves of wood, coconut and cocoa of the country. We can also find endangered species of fauna such as the almiqui, the royal woodpecker and the canguero sparrowhawk or Cuba kite. Also nature jewels such as polymita snails, considered by the snail experts as the most beautiful mollusk of the world.